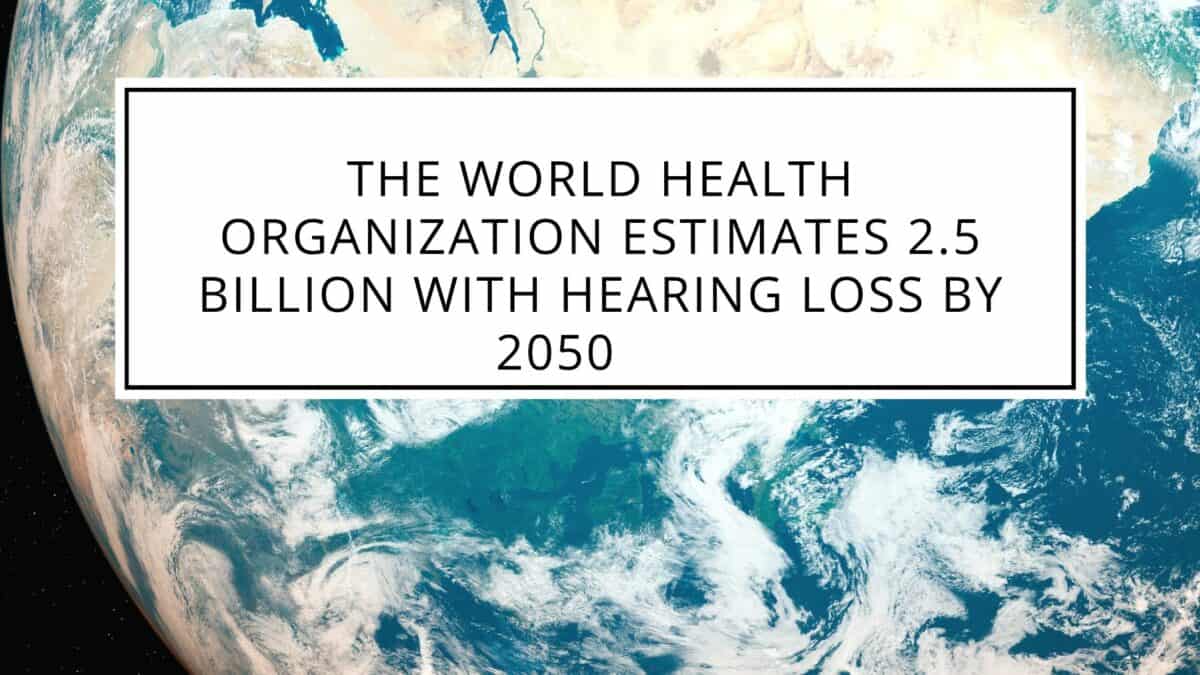 Do you live with hearing loss? You might be and not even know it. Hearing loss is the third most chronic health issue in the United States, twice as prevalent as cancer and diabetes. Worldwide it is estimated that 466 million people, or 5.5 percent, have hearing loss and this number is expected to rise significantly.

A new report issued by the World Health Organization (WHO) this March 2021, warned that these numbers are projected to rise significantly in the next thirty years. WHO estimates that by 2050, 2.5 billion people worldwide will be living with some degree of hearing loss. This is alarming because it means a potential 50% increase in less than thirty years! This is a moment to sound the alarm but to also practice hearing loss prevention and hearing protection now, to lower these numbers on a systematic, global level.

To put into perspective the severity of 2.5 billion globally, living with hearing loss that equals 1 in 4 people living with the condition. Most forms of hearing loss must be taken seriously because, while treatable they are also irreversible. Untreated hearing loss may seem like a mild health issue in comparison to others, but on further inspection, undiagnosed and untreated hearing loss is a communication issue, which quickly isolates and alienates individuals, leading to higher instances of chronic depression and anxiety. It also greatly affects cognitive functioning, which has been found to increase the risk of dementia later on in life. In short, hearing loss is a quality of life issue that can cause a greater severity of other health concerns connected to lack of activity and depression.

Why is Hearing Loss Projected to Rise?

These are simply projections, but they are based on current trends and behaviors. WHO suggests a few factors for this staggering increase. For one, WHO suggests that hearing loss may rise, simply due to a lack of understanding around hearing loss. Hearing loss most often occurs slowly over years, to the point where it is so gradual, many don’t even realize their hearing ability has been whittled away. It is common for those close to you to notice a hearing issue before you.

While hearing loss is a condition, generally perceived to only affect older adults, this is not the case any longer. WHO estimates that 1.1 children and young adults, ages 12-35, are specifically at risk of developing hearing loss due to exposure to loud noise through audio devices and/or loud venues. Noise-induced hearing loss can occur at any age and occurs when noise levels reach past safe listening levels, to damage the tiny hair-like cells of the inner ear, which transmit sound to the brain.

The number of young people affected by noise-induced hearing loss has skyrocketed in younger generations, due to loud concerts, nightclubs, sporting events, and particularly, the use of earbuds and personal listening devices which send sound to the ears and decibel levels which can damage the ears in only 15 minutes. It is not just the sound level, but the length of exposure, which damages hearing, and personal listening devices are the perfect storm of level and length.

Part of the issue with a projected global rise in hearing loss is that hearing healthcare is not always integrated into national health programs. In the US in most health care programs insurance rarely covers care for the ears, despite its importance to total health.

Currently, WHO estimates that in most countries worldwide, nearly 78% have less than one Ear Nose &Throat (ENT) specialist per million population. Even more alarming, 93% have less than one audiologist per million population. While the trend of hearing loss is surely on the rise, it is believed that by taking action now and providing more health care for hearing, globally, hearing loss can be treated or prevented.

Slowing the growing number of people with hearing loss starts with you. Educating yourself around hearing safety and protection and letting others know could protect and maintain hearing ability for years to come. Make sure you know the level of sound around you in your day and wear hearing protection whenever you suspect you are being exposed. If you do suspect you have a hearing loss, it is important to address it right away. Schedule a hearing test now. Dealing with your hearing now is one small step towards protecting hearing around the world.